I have been writing a lot, lately, on the disastrous bailout, for FoxNews.com's "Fox Forum," and for The Politico's "Arena" section.
Posted by James P. Pinkerton at Wednesday, November 26, 2008 No comments:

I just posted this on The Politico's Arena website. The question was, "does anyone get what's happening with our $700 billion?" And my answer:

No one knows what’s happening on the bailout—and that’s the point. Power never wants accountability, and money never wants transparency.

It’s hard to blame the revolving-door Wall Streeters, the ones running the program, for operating this way. It’s the only way they know. Sharks can’t help themselves.

But it is easy, and necessary, to blame those who claim to represent Main Street for voting for it—they should have known better.
Posted by James P. Pinkerton at Thursday, November 13, 2008 No comments:

Will a Governor Be the GOP’s Next Star?

I just posted this at FoxNews' "FoxForum" site:

Miami – Here at the Republican Governors Association annual meeting, there is no great sense of defeat, but rather a sense of positive anticipation—and for good reason.

Despite the general GOP wipeout of 2008, no incumbent Republican governor was defeated for re-election this year; in fact, two Republican incumbents, Mitch Daniels of Indiana and Jim Douglas of Vermont, hung on, even as their states went for Obama. Indeed, the case of Vermont’s Douglas is particularly striking: he won a fourth term with nearly 55 percent of the vote, while Obama was winning the Green Mountain State by more than 2:1.

So while the Party’s presidential candidate, and its Congressional wing, were both soundly repudiated at the polls earlier this month, Republican governors did well. Republicans still have 21 governors—including a certifiably hot political property for the future, Alaska Governor Sarah Palin, who speaks here this afternoon.
And staffers at the Republican Governors Association (RGA) look forward to 36 governorships are up for grabs in 2010. With George W. Bush and his deep unpopularity gone from the White House, and Barack Obama the incumbent, the “off year” election of ‘10 is likely to go quite well for the Republicans. The RGA could well find itself back in the majority come 2011.

And in the shorter term, the RGA has gotten some big breaks: In a grotesque sign of arrogant hubris, Terry McAuliffe, a former Democratic National Committee chairman and chairman of Hillary Clinton’s presidential campaign, has announced that he wants to run for governor of Virginia in the “off off year” of 2009. McAuliffe’s ambition is a huge gift to Republicans: Take a Democratic wheeler-dealer, born in upstate New York, then transplant him to the Beltway, where he made millions as a K Street operative—and then turn him loose on the Old Dominion. Yes, Virginia is changing (Obama carried it) but it hasn’t changed so much that lobbyists can buy the Richmond state house. McAuliffe is exactly the sort of over-reach that Democrats don’t need. But it’s what they’ve got, as Democrats over-interpret the 2008 election.

And returning to the longer term, the defeat of Sen. John McCain only underscores the reality that statehouses are the best springboards to the presidency; the last time that a Republican Senator or Congressman went directly to the White House was 1920.

Ed Tobin, a former executive director of the RGA, now a lawyer in Boston, offers an explanation for gubernatorial effectiveness, “Governors are leaders—they have to be. Governors have to produce. They have to make decisions every day, on how balance budgets and manage programs—and be held accountable for what they do. By comparison, the Senate is a debating society, and the House is too often captured by pork barrelers and earmarkers.”

But there’s is a paradox here. Compared to the outgoing Republican in the White House, and the surviving group of Republicans on Congress, governors might be the most effective, but they get the least attention. Out in the states, from Alaska to Florida, governors do their thing—and receive little attention for what they do, beyond their own state.

Indeed, the political and policy discussion in Washington and New York is dominated by policy wonks and freelance ideologues, plus whatever Member of Congress has the time to speak at a think-tank seminar—or go on cable TV. That is, the “national” debate eclipses the state-by-state actions of governors, in both parties.

For their part, governors just plug along in their states, confident that their own constituents will be able to judge their performance.

But of course, whenever a party gets tired of losing nationwide, it is well advised to look out to the states, and the statehouses, for new talent.

As Tobin, the former RGA staffer, puts it, “Governors are closer to the people. They have their principles, but they are also pragmatic.”

So President-elect Obama has asked Cong. Rahm Emanuel (D-Ill.) to be his White House chief of staff. I am a little surprised that Emanuel would consider taking the job; he is giving up, at age 49, a promising long career in the House of Representatives—to become an aide to someone else. Yes, he will be part of history in the 44th President’s White House, but he would have been part of history in the 111th Congress, and thereafter.

But I am not surprised that Obama offered him the job. Obama, the man with the awkward middle name, could use some reinforcement among Jews, Christian Zionists, and other friends of Israel. At the tail end of the campaign, Rep. Jerrold Nadler (D-NY) was caught on camera telling a synagogue in Florida that Obama “didn’t have the political courage” to walk out of Reverend Jeremiah Wright’s Afrocentric church. Indeed, the close scrutiny of Obama’s life and times—including the tantalizing details about life with a Kenyan Muslim father and an Indonesian Muslim step-father—has only just begun. Muckrakers and biographers and kiss-and-tellers (some peddling truth and perhaps more peddling falsehood) will come from all corners of the earth. The White House rapid-responders will have to be ready.

And then, of course, Obama plans some profound shifts in American policy toward the Mideast and the Muslim world. The 44th President will need all the Jewish help he can get.

Yet there will be some pushback on the Emanuel choice from Obama’s own base—because Emanuel is not a “movement” leftist. Indeed, Steve Clemons, the well-known DC blogger, headlined his posting “Movement Left has Stroke: Rahm Emanuel Accepts Obama's Chief of Staff Offer.” Clemons, who seemed to know sooner than the rest of us that Emanuel had, in fact, taken the job, observed, “Many in the movement left are having a heart attack that the first major move of President-elect Barack Obama is the appointment of Congressman Rahm Emanuel as White House Chief of Staff.” Emanuel is a liberal, but he is not a Moveon/Acorn-type leftist. And that will go down hard with Moveon-ers and Acorn-ers.

So what would Emanuel be like in the White House? This inheritor of Chicago political tradition? On Thursday, The Politico referred to Emanuel’s “take-no-prisoners style.” Indeed, one thinks back to the 1987 film “The Untouchables,” in which would-be gang-buster Eliot Ness (played by Kevin Costner) is told by an Irish cop (played by Sean Connery), “You wanna know how to get Capone? They pull a knife, you pull a gun. He sends one of yours to the hospital, you send one of his to the morgue. That's the Chicago way!” Obviously Emanuel in the White House wouldn’t rub anyone out, but it’s a safe bet that Emanuel would play the hardest of hardball.

Meanwhile—and this is all part of the plan—President Obama can sail above it all, speaking in lofty tones to the adoring multitudes, preserving his own image from the chips and cracks that come from down-‘n’-dirty politicking. That is, Obama can take the high road, and Emanuel can take, well, the not-so-high road.

But this much is for sure. Obama has big plans for his presidency. The veteran street organizer knows tough tactics, even if he himself no longer wishes to engage in them. That’s for others now.

A veteran Democrat told me on Wednesday that the Obama campaign has $160 million—that's right, $160 million—left over from his campaign. After the campaign pays off its outstanding debts, covers legal and accounting fees, etc., it will still easily have $100 million left. To do what with? Well, one can assume that Obama means it when he says, as he has said several times, that he will look for ways to keep his political organization going, even after the election, presumably to advance his legislative agenda—and, presumably also, to get going on his 2012 re-election campaign.

In addition, Obama has 3.6 million donors on file, as well as 40 million people who are considered Obama volunteers. Obama can get things done with those sorts of numbers and quantities. And Emanuel will be at his right hand.
Posted by James P. Pinkerton at Thursday, November 06, 2008 No comments: 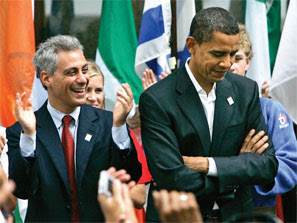 Who does this picture, above, remind you of?

Is this a time to nail Obama for visual plagiarism? Or to say a prayer? 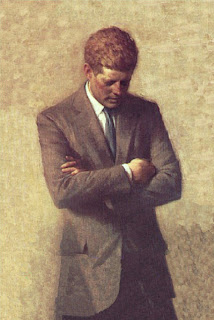 Posted by James P. Pinkerton at Thursday, November 06, 2008 No comments:

John McCain could never decide if he wanted to be a winner—or a martyr. He took arbitrary stands (he would prefer, of course, the adjective "principled") on issues that cut against the grain of his party, as well as undercut his potential victory coalition, which always had to include populist Reagan/Hillary Democrats. He opposed drilling for oil in Alaska’s Arctic National Wildlife Refuge and denounced those who mentioned Reverend Wright or Barack Obama's middle name. And he supported "comprehensive immigration reform" and "cap and trade" on global warming—liberal positions which were anathema to the GOP faithful, as well as turnoffs to moderate-conservative Democrats. All of these "high-minded" stances garnered McCain favor from newspaper editorial boards and self-declared establishment thought-leaders, but all taken as insults to the Republican base.

And yet when it came time for the general election, environmentalists, the mainstream media, and Hispanics all went solidly for Obama, joined by a sufficient number of swing Democrats, who saw no compelling reason to cross the aisle and vote Republican. In particular, McCain got no "credit," if that's the right word, from good-government types for not bringing up Obama's support for drivers' licenses for illegal aliens--probably the single best populist arrow the Republicans had in their quiver, and yet an arrow that McCain never fired.

To top it all off, McCain voted for the Wall Street bailout last month--once again putting the establishment ahead of the Republican base, putting pundits’ praise ahead of populist swing voters. And so, by the end of the campaign, plenty of activist Republicans had figured out what McCain really thought of them, and acted accordingly.

With apologies to Frank Sinatra, McCain ran the campaign "his way"--and just like the narrator in that famous song, he paid a steep price. Maybe that's what McCain wanted all along. It sure seems like it.
Posted by James P. Pinkerton at Wednesday, November 05, 2008 No comments: