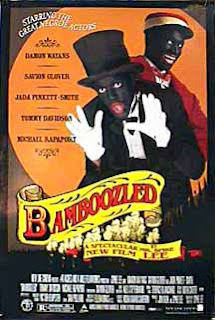 Is "Obamboozled" a word? You know, a fusion of "Obama" and "bamboozled"?

You've been "bamboozled." That's the famous quote from Malcolm X, addressing fellow blacks in Harlem back in the 60s. The full quote, at least as it was recorded in Spike Lee's film "X," is:

"Every time you break the seal on that liquor bottle, that's a Government seal you're breaking! Oh, I say and I say it again, ya been had! Ya been took! Ya been hoodwinked! Bamboozled! Led astray! Run amok!"

Again, the key thing to remember is that this was Malcolm addressing his fellow blacks. Wake up, people! Quit with the drugs and alcohol.

And so I couldn't help but think of that quote when I saw this headline on the front page of The Washington Post this morning: "Recovery's Missing Ingredient: New Jobs/Experts Warn of A Long Dry Spell." Barack Obama has been bamboozled--bamboozled by an economic policy aimed at Wall Street, not Main Street--and certainly not Division Street.

Here's some of what the WaPo's Michael Fletcher had to say:

With many forecasters projecting unemployment to remain above 10 percent next year and not return to pre-recession levels of roughly 5 percent for years after that, Obama is likely to be confronted with defending the effectiveness of his economic policies as the nation endures its worst employment situation in a generation.

Analysts say the high levels of joblessness would be accompanied by increases in child poverty, strained government budgets, and black and Latino unemployment rates approaching 20 percent.

"I find it unfathomable that people are not horrified about what is going to happen," said Lawrence Mishel, president of the Economic Policy Institute. "I regard all this talk about how the recession is maybe going to end, all the talk about deficits and inflation, to be the equivalent of telling Americans, 'You are just going to have to tough it out.' But we're looking at persistent unemployment that is going to be extraordinarily damaging to many communities. There is a ton of pain in the pipeline."

As an aside, one can ask: What would the WP be saying if it were a Republican President in the White House?

In any case, as I wrote last week for USNews, Obama's solicitude for Wall Street has probably cost Obama his chance to enact a health care plan.

(The picture, btw, comes from a somewhat obscure Spike Lee movie from 2000.)